← back to
Lakeshore Records
Get fresh music recommendations delivered to your inbox every Friday. 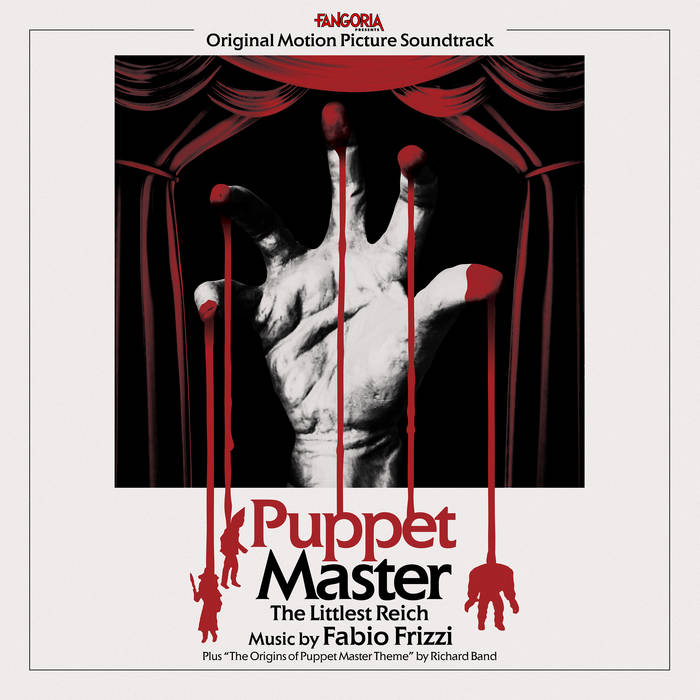 Lakeshore Records and Fangoria Presents have teamed up to release Puppet Master: The Littlest Reich—Original Motion Picture Soundtrack which features an original score by legendary film composer Fabio Frizzi (Zombie, City of the Living Dead, The Beyond), digitally on August 10th.

This is the first soundtrack to fall underneath the banner Fangoria Presents from Cinestate. Written by by S. Craig Zahler (Brawl in Cell Block 99, Bone Tomahawk) and starring Thomas Lennon, Udo Kier and Barbara Crampton, the film was produced by Cinestate in conjunction with Fangoria and will have a limited release in theatres beginning August 17th. Based on the Charles Band cult classic, the new reimagining of the Puppet Master series has been garnering rave reviews for it’s over the top gore and dark humor.

Recently divorced and reeling, Edgar returns to his childhood home to regroup his life. When Edgar finds a nefarious looking puppet in his deceased brother’s room, he decides to sell the doll for some quick cash. Girl-next-door Ashley and and comic book pal Markowitz join Edgar for a doomed road trip to an auction at a convention celebrating the 30th Anniversary of the infamous Toulon Murders. All hell breaks loose when a strange force animates the puppets at the convention, setting them on a bloody killing spree that’s motivated by an evil as old as time.

Says Frizzi: “I started working early in film music. It was the beginning of the 70s, Italian cinema was very prosperous, and there were productions of all kinds. I remember that the common element among them was enthusiasm, a deep love for what is called the seventh art, and is for many producers, directors, screenwriters, and workers first of all, a passion. It's been a long time, but Cinestate involved me in this new adventure, which has had many points in common with my early experience in film music. In each one of them I found that atmosphere, that enthusiasm, that strong passion for cinema. And I immediately felt at home.
This score is dedicated to my brother Fabrizio, with whom I shared 60 years of fun and hopes.”

ABOUT FABIO FRIZZI
Composer, orchestrator, and conductor, Fabio Frizzi, with over a hundred film and television scores, winner of numerous awards, has followed in the footsteps of the masters of Italian cinema.

A great cinema lover, he conjugated his innate musicality to the seventh art from a young age. In love with the Baroque and Johann Sebastian Bach, inspired by the works of Nino Rota, Carlo Rustichelli, Ennio Morricone, as well as by the great international cinema composers, he made his decision to undertake this career after having assisted, thanks to Sergio Leone, the recording of the soundtrack of "Down the Head".

Raised in a family that had made cinema his own life, his father Fulvio was one of the greatest architects of the Italian cinema of the golden years, Fabio grew up listening to good music of the most diverse genres and origins: opera, baroque, symphonic Russians, popular and traditional music, pop, prog, chansonniers .... he studied piano and many other instruments, but the great companion of a lifetime has been the classical guitar. In addition to composing for Cinema and Television, he has written a lot for the theater and considers his numerous ballets to be the flagships.

The collaboration with the director Lucio Fulci, which lasted from 1975 to 1990, deserves a special mention. It was the a real fil rouge of Frizzi's career, which gave him an international visibility and appreciation among the genre cinema lovers. "THE BEYOND", "CITY OF THE LIVING DEAD", "I QUATTRO DELL'APOCALISSE", "SEVEN NOTES IN BLACK", "SILVER SADDLE", "ZOMBI 2", "MANHATTAN BABY", and "NIGHTMARE CONCERT" are part of this long collaboration.

Bandcamp Daily  your guide to the world of Bandcamp

Lance Skiiiwalker joins the show to discuss his most recent releases